Despite my deepest desire to watch non-league in Horsham, Leatherhead or Thurrock over the Bank Holiday weekend, my long haired sergeant major decided otherwise, so I ended up getting my football fix in North Rhine-Westphalia instead.  A trip to Düsseldorf brought about a veritable feast of footy.  However, as enjoyable as it was sitting in a bar on the beautiful banks of the Rhine, watching Fortuna Düsseldorf grab a last minute 2.Bundesliga winner away to SV Sandhausen, the real highlight was my trip to Signal Iduna Park.

Now, it’s fair to say that Ballspielverein Borussia 09 e.V. Dortmund – known to you and I as Borussia Dortmund – are my favourite German team, so when the future Mrs Grass Roots Tourist agreed that I could hijack her Bank Holiday weekend with a football match I was delighted.  The only place I’ve previously watched football overseas is the USA, and whilst our Colonial cousins do a lot of things well, live soccer isn’t really one of them.   I’d read that the 1.Bundesliga regularly receives the biggest attendances in Europe, and that the football is fantastic and the atmosphere some kind of boozy sports nirvana.  How close to the truth is that?  Here are a few take away points from my visit to BVB vs Hertha Berlin SC, and some observations on the match itself. 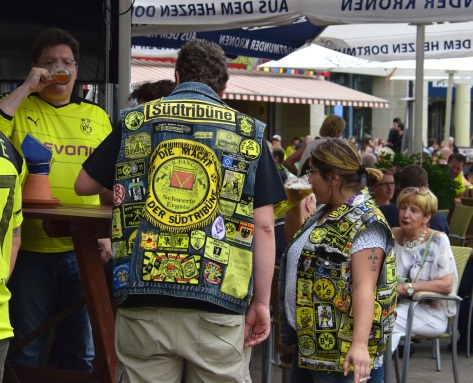 1 – First, and most noticeably, football in Dortmund is an all-encompassing event.  From the moment we got off the train, it was quickly apparent that the whole town was in on this.  Maybe an element of this comes from Dortmund being a one-team-town in an industrial hotbed, but it was really quite something.  Hundreds upon hundreds of fans spilling out into the city centre, all with a beer of some variety in hand – men, women and children (they start young in Germany) and all of them in yellow.   The sheer ubiquity of the yellow is overwhelming.  Wenkers Bar on Betenstraße is well worth a visit, packed with the shirts of former Dortmund opponents and BVB fans smashing back the Dortmunder Kronen (other brands are available) whilst watching the day’s other games on TV. 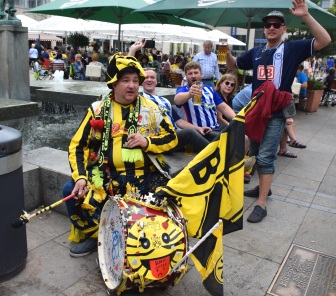 2 – The Signal Iduna Park is outrageous.  An 80,000 plus amphitheatre for football.  It’s well served by a local underground station, but also just a quick forty minute walk from the Hauptbahnhof. Once there, on the outside it’s everything a modern football stadium should be – spacious, accessible, vibrant and with enough fan shops to give even the wealthiest parent heart palpitations – if you can conceive of a product, you can buy it branded with “BVB 09”.  However, once you’re the inside this ground represents everything that’s great about the game.  A febrile, bubbling cauldron of colour and noise – particularly when they launch into the pre-match rendition of You’ll Never Walk Alone.  Which brings me onto…

3 – Everything about German football is set up to enable this.  At around 17 Euros for a ticket, very few are priced out of attendance, and this means that the corporate hospitality culture of Premier League football in England can’t drown out the passion of the regular fans.  You can drink in the stands, you can bring in flags, you can smoke.  The stewards are relaxed, the beer isn’t outrageously expensive and the food is decent (bratwurst, of course).  Being sat at the very rear of the stadium, with a beer in hand in a wafty 1970s pub atmosphere of smoke, singing and swearing (that I didn’t understand) may not be everyone’s idea of football heaven.  However, to me, this lack of enforced and unnecessary control felt like such a potent antidote to the overly-regulated environment of professional English sport (and dare I say society as a whole). 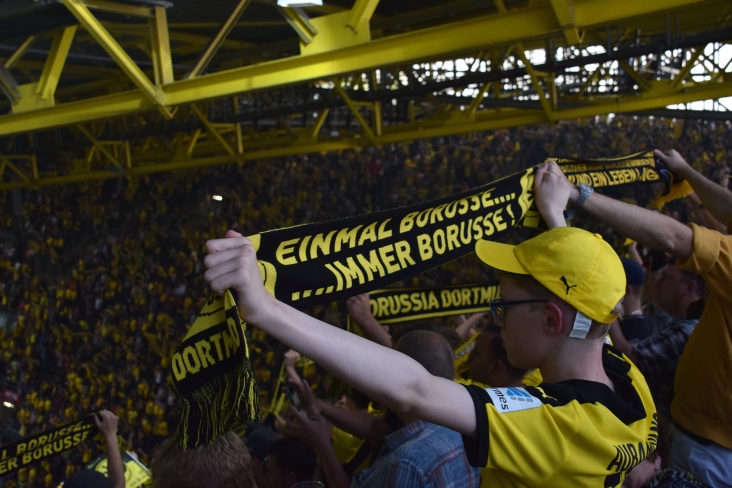 4 – However, maybe this atmosphere does have the occasional drawback.  A Hertha BSC fan outside the ground feeling sufficiently emboldened to punch me in the face – right in front of four Polizei – whilst shouting “Keine kamera!” may not have occurred had the official presence not been quite so permissive.  Thankfully – and my main concern – the camera was not damaged, but still not a particularly pleasant experience. 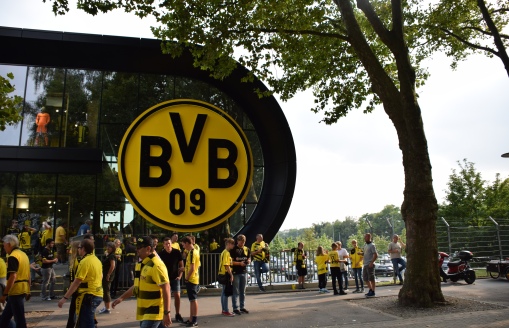 5 – Regarding the football itself, Borussia Dortmund’s style was a joy to behold.  A team who the day before lost one of its best players in Ousmane Dembélé for a fee large enough to buy the Death Star were exceptional.  The gegenpressing made fashionable by exponents such as Klopp truly suffocated their opposition.  Any loss of possession in the final third was followed up by an immediate and aggressive hunt for the ball.  The Hertha players simply couldn’t cope in the face of such intensity.  Of course, had BVB’s players not been so effective on the ball it wouldn’t have mattered, but the close control and composure when in possession were exceptional.  About seventy minutes in, I remarked to my girlfriend just how fit the Dortmund players were – even in professional football, a game of highly tuned athletes, it was noticeable just how impressive their recovery rates were and the amount of sprints each player got through.

6 – Having had Japanese food the night before, the other half couldn’t stop referring to Mario Götze as Mario Gyoza, and that was the only thing I noticed about him.  For such a highly rated player, I can only assume my viewing brings out the worst in him.  As has happened every time I’ve watched him on TV, he flattered to deceive.  I was, however, impressed by Aubameyang, who scored the first.  Shockingly, the consistently high-scoring Gabonese international is pretty good.  So, so strong despite his slim build, good in the air and a fine finisher.  Nuri Şahin was also great to watch live.  A real metronome in midfield, he’s dynamic in possession and rarely out of position.  We were sat directly behind his strike to double Dortmund’s lead and it was exquisite.  Clocked at 108 km/h it was a half volley of the sort that on another day would have landed in nearby Bochum, but on this occasion threatened to tear a hole in the net, and possibly the space time continuum.

7 – However, the star man was Christian Pulisic.  After a visit to the Hershey Factory in Pennsylvania last year, my girlfriend was almost as excited as me to see Hershey, PA’s second most important export.  The Croatian-American eighteen year old is phenomenal.  BVB have history with American players – it was at this club that Jovan Kirovski became the only American thus far to win the Champions League (when Lars Ricken came off the bench to sink Juventus in the first Champions League Final I remember watching…) and Pulisic is well placed to follow suit.  In fact, I’m calling it now – forget Freddy Adu, this is America’s greatest ever player in waiting.  He’s probably already better than Landon Donovan or Clint Dempsey ever were at their peak, and he’ll only improve.  Playing on the right-wing, and cutting in onto his left, Pulisic was at the heart of everything for Dortmund.  He’s been linked to every mega-club in Europe and it’s easy to see why.  I fully expect Billericay Town to sign him on mega wages soon.   The thing with Pulisic is that he’s just such an exciting player.  Always seeking to attack, loves a stepover (when appropriate) and each time he was on the ball, everyone was on their feet.

8 – I couldn’t write about visiting Borussia Dortmund without mentioning the Yellow Wall.  See the pictures, but be aware that no photograph can do that mass of yellow humanity justice.  The Südtribüne is Dortmund’s hardcore fan element and is an incessant barrage of noise and movement.  With almost 25,000 fans, jumping, clapping and singing as one for the entire ninety minutes (and then some at the end) the effect is a fluid, almost tidal view.  It is something which every sport fan should see.

All in all, even with a clip from a scrotey Berlin fan, visiting Signal Iduna Park was a fantastic experience.  Whilst my heart – and that of this blog – will remain with non-league, I have definitely caught the bug for watching football overseas, and would recommend a visit to Dortmund to anyone.  They were good value for their 2-0 victory, and once again are likely to be Bayern’s closest challengers.

One thought on “A trip to Westphalia…”

The author retains the copyright on any and all images published on this blog. If you wish to use them for any reason please use the contact tab above.